My daughter asked for a spy party for her 8th birthday party, so we set up a "super spy advanced training" party for her. 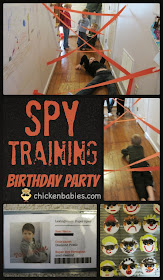 This was a very popular party. The first step was to send out invitations:

"Future agents . . . you have been specially selected to attend an advanced class in super spy techniques this Saturday, Nov. 20th at 10 am. Upon graduation you will have mastered the skills of observation, sneaking around, and birthday cake consumption. Black clothing would be appropriate but is not necessary. At 11:30 we will send you back out into the field, prepared to solve crimes and stop bad guys, with a license to nil. (please allow 6 to 8 weeks for delivery of license.)"

When the guests arrived, we took their pictures to go on their spy license, and had them color spies hiding behind bushes and park benches on a wall mural. 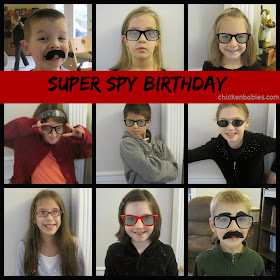 Next we chose our spy code names. I put nouns in one jar and adjectives in another. Maren helped me come up with them. We let the kids pull one slip of paper out of each jar and that was their code name. Some of my favorites included the Black Thorn, the Ruby Snake, Silent Bear, and the Diamond Pickle.

After choosing our code names, we sharpened our observational skills. I used the same game from a book club activity the previous summer. I put out several objects on a tray, let them study it for a few minutes, and then had them close their eyes while I took away 3 or 4 of the objects. Then they would try and write down what was taken away. Each round I added a couple more objects to make it more difficult. We played 4 or 5 rounds. 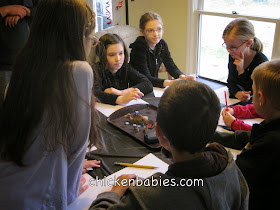 Next we played a sneaking game we called "guard dog". I had one child sit with their eyes closed and their back turned to the rest of the group. We put an object behind them that they were protecting. Then the chosen super spy would try to sneak up as quietly as possible and grab the item. The guard dog had one chance to spin around and tag them, so they couldn't repeatedly turn around to try and catch the spy.

Their final training exercise was the laser beam challenge. They formed a line and took turns trying to get through the hallway without touching any laser beams (which were just red streamers). I started with just 3 laser beams in the hallway and after the whole line had gone through I added 1 or 2 more. By the end of the game the hall was covered in streamers and it was very difficult to get through, but I was surprised how many kids made it without touching. This was by far the favorite game. 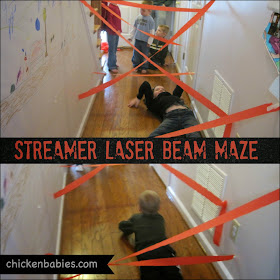 Then it was finally time for the birthday cupcakes! Maren helped me make spy faces on the cupcakes with junior mint sunglasses and various other candies. She really enjoyed making and eating them. 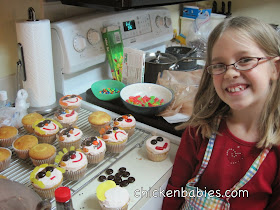 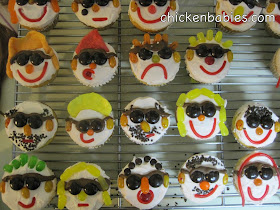 When it was time to go home, we handed out the party bags. The bags included the following:

- Magnifying glass
- pen and notepad
- spy kazoo - for calling if you need help, or secret spy signals
- mini flashlight
- bubbles, to confuse your opponent (hey look, bubbles!)
- black graduation wristband, to help you identify other graduates
- spy mustache and beards (I had made these out of black felt and garment tape)

Maren wrote "top secret" on some brown paper bags and we called it good. 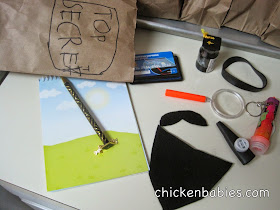 Later I made the kids Super Spy cards. You can find the template for them on this Super Spy I.D. Card post. 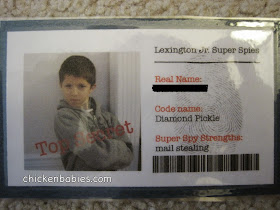 This was a great party and I hope these ideas have helped you!

Thanks for stopping by! Be sure to check out my other birthday parties.  Also follow my birthday board on Pinterest.