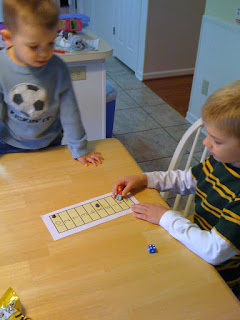 One of the kids' favorite math games to play is "number ladder".  I got the idea out of a book called "Games for Math" by Peggy Kaye, although I added candy.  The point of this exercise is to practice basic arithmetic.  You draw a ladder and fill it in with numbers between 1 and 10 in random order.  Then the student rolls the die and has to add the number on the die to the numbers on the ladder, starting at the bottom. Each time he gets the answer right, he moves his little lego guy up the ladder, but if he makes a mistake, he goes all the way back to the bottom and has to start up again.  I put a small treat (in this picture chocolate chips) on the 5th number and the top number, so when he reaches those spots he gets a treat.  Maybe that's why they like to play this game so much. . .  Joshua is working on his addition, but Maren has to practice her multiplication (although if she rolls a 1, I make her roll again).
Share