A Late-Over Birthday Party for my 11 Year Old

Last November/December was a really busy time for our family. Both Maren and Joshua had birthdays that pretty much got ignored. I told them I would try to do something early in the new year for them, because it's always fun to have a big play-date with friends and cake.

As you may remember from last year's party, Maren has decided she's too old for themed parties. I am not yet too old for themed parties, so I presented the idea of having a "late-over" because we are celebrating her birthday late. (We have decided not to do sleepovers as a general policy, and some of those reasons are well expressed in this article.) That was as close to a theme as I could get with this rapidly growing "I'm too big for that kind of stuff" child. 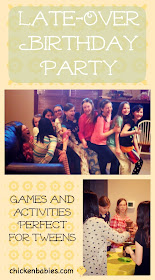 She invited over some friends from school and church and we had a fun night. Girls were invited to wear their jammies and bring a pillow and blanket for when watching the movie if they liked.
The girls arrived at 5:30. We had set out pillowcases and permanent markers which they could decorate while we waited for everyone to arrive. (when decorating the pillows, make sure to put a piece of cardboard or aluminum foil inside the pillowcase so the color doesn't bleed through to the other side.) We also had the girls each sign a pillowcase for Maren for her to keep as a souvenir of her party. The girls wrote their names and some nice words about Maren on it.


We then played our favorite lap-sitting get-to-know you game since the girls didn't all know each other.  (You can see an earlier write up of this game in this old post) In this game you write up a list of statements and then read them one at a time. If the statement applies to a person, that person moves over one spot, but if the person sitting next to them doesn't move, they end up sitting on that person's lap. You end up with several pile-ups and the girls had lots of fun. We left some blank slips of paper in the cup so the girls could make up their own if they liked. Here's the list of the statements we used if you want to copy: Lap Game Sentences. We just said "Move over one spot . . ." before reading each paper.

After the game we said a prayer and had dinner. We served turkey and cheese croissant sandwiches, chips, strawberries, and raspberry lemonade.

The girls then came into the family room to play bingo. I had purchased a bunch of fun candy and gifts such as lip gloss and notebooks for the big prizes. I had a bucket of small candies as prizes after a girl had already won 2 big prizes. After playing for a while we let the girls who hadn't yet won 2 prizes choose something out.

We decided that instead of a cake this year we would get out the chocolate fountain for dessert and have lots of fun things to dip. After giving the girls some instructions about how to dip things in the chocolate fountain without spilling too much and making a mess (which instructions were largely ignored) we let the girls go wild. We had set out strawberries, bananas, sugar wafers, donut holes, marshmallows, pretzels, and Peeps (we only had 1 peep per girl though). 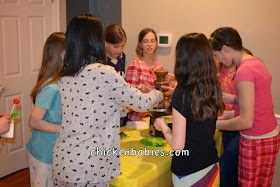 After dessert, there were presents and then the girls watched a movie while eating popcorn. The girls voted between watching "Ella Enchanted", "The Princess Bride", or "Percy Jackson: Sea of Monsters". "The Princess Bride" won. Parents picked up their daughters around 10.

Maren really enjoyed having her friends over and staying up past her bedtime. It was a fun party and I'm sure we'll do another one like it.

"How to Throw a Party" party for tweens