Occasionally when Jason is not going to be home for dinner, I like to do a "fancy restaurant" with the kids to help pass the time.  Usually I just type up a menu of whatever leftovers and easy things we have to eat in the fridge, put a tablecloth on the table, and use my fancy waiter voice.  But, since it is October, I decided to do a Monster Meal Menu, just to make things more fun. 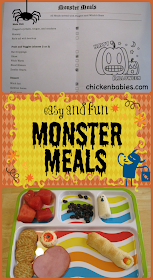 Originally I had grand plans to make some of the really cute foods I had been seeing around pinterest for Halloween, like the jello worms or edible spider webs, but I just didn't have time to make them before dinner.  So, I just used what I had and gave things spooky names to make it fun.

I told the kids they had to pretend they were monsters going out to dinner.  I used my fancy monster restaurant voice, and took their orders.  I refused to tell them what each item was, even though last Christmas I had broken down and told them when we did something similar.  This time I just wasn't going to do it.  They had to just guess.  Here is what I had on the menu, with what they are in parentheses.

The kids ordered and then ran outside to play while I got their plates ready.  The plates were very easy to assemble. Most things required no preparation, just imagination. 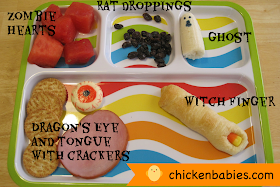 To make the fingers, I shaped pillsbury breadstick dough before baking, and after it had cooled off a bit after baking I pushed a candy corn into the tip for a fingernail.

For the Witch's Brew, I put a few drops of food coloring at the bottom of each glass, then covered it with ice. I kept the glasses on the counter by me so they couldn't look too closely.  I told the kids they could have water or ginger ale (Christopher won't drink anything but water) and they were surprised to see the ginger ale magically change color when it was poured into the glass.  I think that may have been their favorite part of the meal, actually.  They wanted to try the trick on daddy when he got home later.

To make the mummy pizza, I toasted an english muffin, then spread some pizza sauce on top and layered on strips of string cheese. Sliced olives made the eyes. I broiled it to melt the cheese and then it was done. It only took about 5 minutes to make. 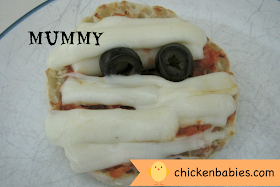 For desserts, I made witch's hats with an upside down fudge striped cookie, a hershey kiss, and a bit of frosting I had leftover from another dessert. 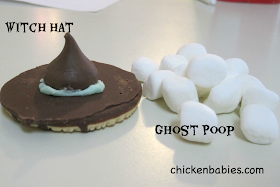 The kids had fun eating like monsters and asking for more "warts" and "zombie hearts".

This was a good reminder to me that my kids like simple things just fine.  I had wanted to do a lot more with decorating the table spooky or having candles, but just didn't have the energy or time for it, and had considered not doing anything since I couldn't do everything I had imagined, but the kids didn't miss it. They enjoyed it and thought it was fun even without all the extras.

It just goes to show that all kids really need to have fun is a bit of imagination to turn regular items into something special! That's good for me to remember.