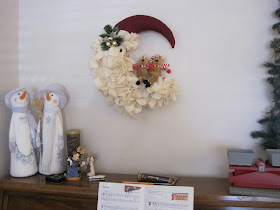 Several years back, before I had ever even heard of the "elf on a shelf" book, my sister told me about a tradition she did with her kids with a stuffed elf toy she hid around the house each day before christmas.  I thought it was a great idea, but I didn't have an elf nor could I find one cheap enough that I liked (don't you think the elf from the book is a bit creepy?).  I happened to already have two bendable reindeer that had been given to us as a gift though, and I thought they would make great reindeer spies. 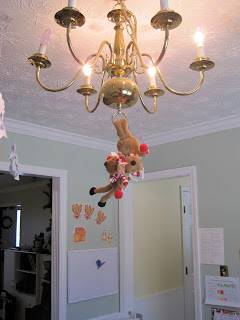 I told the kids that these were special reindeer who were assigned to watch them and report back to Santa on their behavior.  In the beginning we gave them names, but we forgot them year to year, so now we just call them "the reindeer spies".  Each day I put them in a different place and each day the kids are excited to try and find them.  Since they are pretty light weight and have wire in their arms and legs, they are easy to hang and put in interesting places. 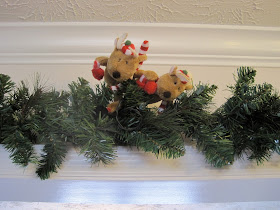 Our reindeer don't do anything sneaky, they just appear in different places. Actually, sometimes they just stay in the same place because I forget, but the kids don't seem to mind too much. I guess they assume they've been so good that the reindeer don't have anything to go back and report to Santa.

Occasionally I will have the reindeer spies leave a note for the kids pointing out good behavior they've seen. The kids respond really well to positive reinforcement, so if I point out (I mean, the reindeer point out) that Maren did a great job helping her brother get breakfast one day, all the kids will be more attentive to helping out their siblings at breakfast. It's a tradition we've had a lot of fun with.